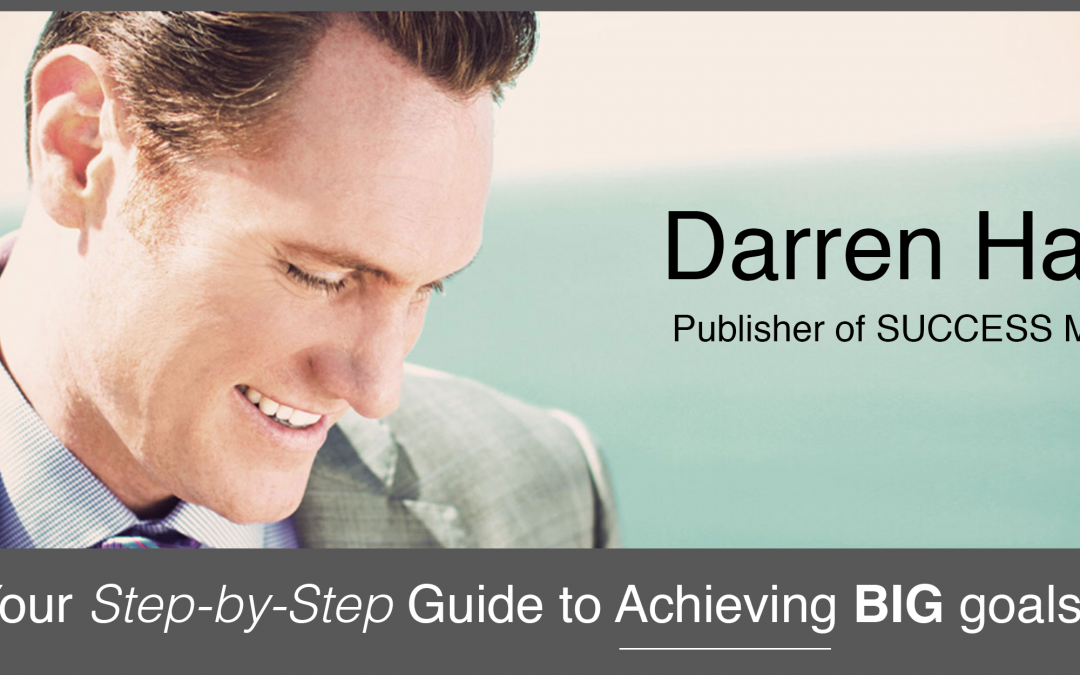 So, you want to be a millionaire?

Darren Hardy knows enough about the subject to write a book on it. Two best-sellers, in fact.

He has picked the brains of the most brilliant achievers of our time. From Steve Jobs to Tony Robbins, to Jim Rohn. And, Darren’s earned his stripes to be the publisher of SUCCESS Magazine because of his own accomplishments.

He set an outrageous goal to earn a six-figure income- before his 19th birthday. He hit it.

After that, he set his eyes on making a million dollars five years later. He hit that, too.

Darren Hardy was worth over $50 million at the ripe old age of 27. He KNOWS how to set and achieve goals.

3 Steps To Achieving Your Goals

As Darren sat down with people like Steve Jobs, Bill Gates, and Jillian Micheals, he noticed something. Many of these achievers shared similar traits! In Darren’s book, Living Your Best Year Ever, he says there are two common traits of super achievers:

1: An UNYIELDING commitment to constant learning.

2: Clearly written goals that have specific plans laid out to achieve them.

Follow these steps to make the most of your goals this year.

Plan to FAIL, A lot

They don’t want to sway the pendulum too far one way or the other. They keep calling the same number of people. They use the same process to manage ISA’s. They keep using the same listing presentation, over and over again. Maybe they change a few things, but most of it remains in the safety of the comfort zone.

Darren Leveraged Failure in HIS Real Estate Business to SUCCEED

You might be thinking… wait, what?? You want us to fail? Darren Hardy did! Watch this video and bring a notepad. You’re going to want to take notes. Darren targeted two areas in real estate where there is PLENTY of pain, sadness and disappointment to be had.

He would drive to a neighborhood and have a checklist with fifty boxes. For every rejection he got, he would check one off.Darren wasn’t running around without a plan. He knew a secret on his way to millions. He knew that the more you pursue failure, it is INEVITABLE that the pendulum will swing the other way into success. Within ONE year, he was the best agent in his highly competitive county in California. Failure is a crucial player to success.

Now, if you have ZERO fear of failing, what are you going after this year? Write this down!

If I was to give you twenty bucks to walk across a rope on the ground, would you do it? How about if that same rope, for the same twenty bucks, was strapped across two towers 100 feet in the air? Any takers?

Okay, now, let’s say it’s the SAME buildings, the SAME twenty bucks… but on the other side of the rope, your children were in the building, and it’s on fire. Would you find a way across the rope? You need to find your why. Your why power is stronger than your what power.The only thing that changed is the why behind your actions.

Michael Reese, Co-founder of the National Association of Expert Advisors, says, “The money you make is a direct reflection of the impact you’re making.”

Write down what your BIG why is for your goal this year.

That’s the power of the compound effect.

Little choices add up to huge results over time. A $4 per day coffee habit leads to over $50, 000 in 20 years. Would you really rather have a latte every day, or a top of the line fishing boat for your retirement? The compound effect is happening whether you believe in it or not.  The saying ”The rich get richer”” is because they are using the compound effect to their favor.

Ignite the compound effect by investing in yourself. When Darren Hardy sat down with Brian Tracey, he said, “For every 1 dollar you spend on your self-growth and development, you add $30 to your bottom line.” That’s a 300% ROI!

Here’s where to start igniting the compound effect:

“The KEY to earning more money, is to become more valuable. The goal is not to get a paycheck. It’s to work for your own personal development. If you become twice as valuable, chances are you’ll make twice as much money.”

Following this formula, Jim Rohn went on to multiply his income by ten… and then ten again! It works. Make absolutely sure to set aside money to invest in yourself.

B. Make Your Car a Mobile Library
Every time you get in the car, listen to at least 10 minutes of inspirational material through audiobooks. Books are one of the EASIEST ways to invest in yourself.

Start with “The Morning Miracle for Real Estate Agents.” It’ll give you a champion’s structure to your morning.

C. Commit to Find and Work with a Mentor
Darren says, “the Greatest People in the World Hire The Greatest COACHES in the World.”
Michael and Jay have mentors.
Darren Hardy has mentors.
Tiger Woods has mentors
This year, YOU need a mentor.

Mentors are CRUCIAL for navigating through pitfalls. They are your personal guide to avoided all the mouse traps in running a business. Sometimes, it’s just the extra accountability that pushes you to the next level. You’re going to push to make that extra call if you’ve got someone to report to about it.

Write down who you need to BECOME

If you’re wondering what Darren’s secret sauce is for achieving big goals, this is it. In an interview with Darren Hardy and his mentor, Jim Rohn, they spoke about pivotal moments.

Jim attributed his success to when he learned this:

“Become a Millionaire NOT for what you’ll earn, but who you will BECOME to get there.” He also said, “If you want to have more… you have to BECOME more. Success is not a doing process; it is a becoming process… Success is something you attract by the person you become.”

So, what’s the number one thing you need to become?

One of the greatest gifts you can give yourself is to become coachable. By being real enough to be coachable, you unlock a superhuman ability to learn from anything, anywhere at any time. 2016 IS your time to be the most successful agent you’ve ever been. Doing the same thing year after year and expecting different results is insane.

If you’ve gone year after year without a mentor, do something different this year and find one. Being coachable will give you a competitive edge over everyone on the market. A coach will be able to hold you accountable to your vision, support you through the pitfalls, and point out areas you could be saving time and money in.

The top athletes in the world hire the best coaches. Their movements become a habit and are blind to their bad form. Bad form prevents them from WINNING. It’s the same for agents. There could be holes in your marketing campaigns, systems, or processes that you just can’t see because you’re too close to the project.

A certified success coach can take a look at your business with you to help you find...

Crushing your goals in 2016 starts with 3 basic steps

In the comments below, tell us what you’re going after this year.