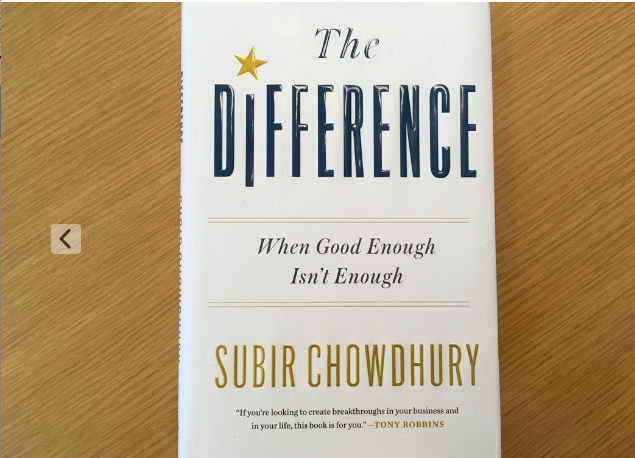 The Difference: When Good Isn’t Enough

Once in a generation, it seems, a new book comes along and inspires business leaders to do better. This new book, already praised by Tony Robbins, Jay Abraham, and Greg Link, will be the one to inspire us to make great advances in our personal lives and business endeavors. The Difference is not specifically for real estate agents, but it points the direction toward laying the foundation for being able to build the sphere of influence we have been describing, and which Luke Bouman referenced in his recent interview with NAEA on Lifetime Value. The book’s content is so rich with insightful reflections, I couldn’t put it down.

Chowdhury begins by examining the important link between excellence and honesty in business, contrasting organizations which strive for excellence with those who work toward mediocrity. In businesses whose aspiration is to be good enough, there is much more personal unhappiness and dishonesty, as problems that require solving are instead swept under the rug. After that, the chapters are organized according to the acronym STAR: being Straightforward, Thoughtful, Accountable, and having Resolve. In the chapter on straightforwardness, Chowdhury explores the consequences of the opposite of honesty, lying and deceit, and the toll it takes on American businesses, as well as companies like Volkswagen. But then Chowdhury looks into fear, pride, which often give rise to dishonesty. Next, he looks at how to be thoughtful, beginning with active listening. This leads to a discussion of empathy. First, we must understand no one person can do everything. We have to think less in terms of me and more in terms of you. Kindness follows from empathy – it is empathy in action.

The structure of accountability is covered in the fourth chapter. It requires being aware that something needs to be done, taking personal responsibility for it, making the decision to act, thinking deeply about the potential consequences of that choice, and setting high expectations. Having and exercising choice may be one of the most important freedoms we have, but that freedom requires accountability. Resolve means never giving up, even in the face of adversity. But that means favoring the long-term rather than short-term solutions. It means the willingness to embrace change and adapt, but at the same time, it also requires the wisdom to say “no” when such an answer is needed.

Consider The Difference not as a rulebook for how to run your business, but as a foundation for excellence – build on that foundation, and watch for major breakthroughs in your business and your life!